Here are the background papers for this meeting:

Here are the background papers for this meeting:

We published information in the North Tawton Roundabout about this scheme – more details have now been released by the Government. Eligible homeowners can get vouchers to help pay for environmentally friendly improvements, although as expected, it’s more complex than it originally appeared. To qualify for financial support, you’ll need to be installing at least one of the following “primary” improvements:

Then if, and only if, you’re installing at least one of the improvements above, you’ll also be able to use the vouchers to install the following “secondary” measures:

There is likely to be much more publicity about this scheme over the coming weeks – we will try and keep you informed, we want residents who might be eligible to benefit as much as possible.   Note that these grants are not means tested, this type of grant has not been available for many years so this really is a one-off opportunity.  Meanwhile, the Money Saving Expert website has some excellent information and advice on this scheme, which they will keep update – so check out their site for more information.

Monday, 17 August, marks what would have been the 90th birthday of one of North Tawton’s most celebrated residents, the former Poet Laureate, Ted Hughes, who lived in the town at Court Green for nearly four decades until his death in 1998.

Born in West Yorkshire in 1930, Ted Hughes won recognition for his first collection of poems, The Hawk in the Rain, while still in his twenties and went on to write prolifically for the next 40 years, creating a hugely diverse body of work – from poetry and prose for adults and children to memorable theatre adaptations and translations. He is rated by many critics as one of the 20th century’s greatest British writers.

The natural world and our relationship with it is one of the most abiding themes in his work, from early poems such as The Thought Fox and Pike through to his classic children’s story, The Iron Man – still one of the author’s best-selling books more than 50 years after he wrote it for his own children. His Moortown Diary is of particular local interest – poems recording the years spent farming near Winkleigh in the 1970s with his father in law, Jack Orchard.

Hughes was also a passionate campaigner for the environment, especially the water quality of Devon’s rivers where he spent much time as an avid fisherman. In a long career, he garnered many literary prizes – including the Whitbread Prize for his last poetry collection, Birthday Letters, exploring his relationship with his first wife – the American poet, the late Sylvia Plath.

In 1970, he married Carol Orchard, who still lives in the home she and Ted shared in North Tawton. Hughes was appointed Poet Laureate in 1984, the last person to hold the position for life, and was awarded the prestigious Order of Merit by the Queen in 1998.

The plaque on the Town Council Office wall commemorating the poet’s life in North Tawton was unveiled by Carol Hughes in 2011.

Photo showing Ted and Carol Hughes outside their NorthTawton home in the 1980s.

South West Devon entrepreneurs of the future are being offered FREE places on an acclaimed workshop to turn their hobbies and dreams into a business.

Designed to inspire people and help them find the confidence to try their ideas, the PopUp Business School is aimed at everyone, from those with no cash and no business experience to fledgling start-ups that need guidance to keep on track.

PopUp’s events are led by successful entrepreneurs and professionals and can be very sought after, with events regularly attracting over 100 aspiring business owners.

The PopUp Business School welcomes people of all ages who are thinking about self-employment. Whether you are at the beginning of your start-up journey, or an already established business looking for new ways to grow and adapt, the course aims to provide the information, inspiration and practical advice to teach you how to build and evolve your business.

Click here for more information or to book a free place.

Everything you need to know about this upcoming course 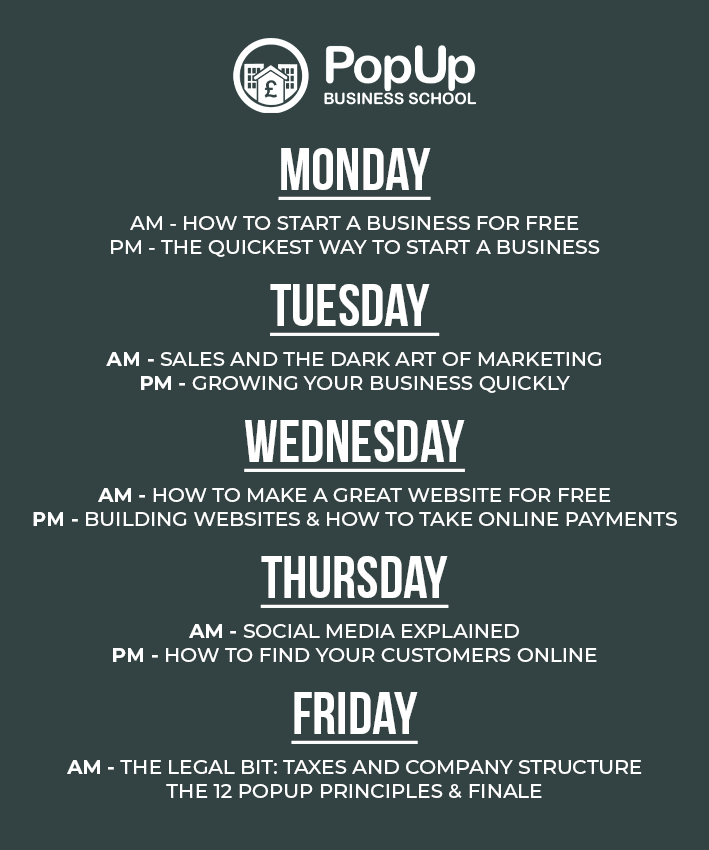 With the posting of official BT notices on the phone box, we’re aware that residents will want to know what is happening to this box.

BT periodically consults with parishes about the future of under-used phone boxes in their area.  At the  last consultation, Autumn of 2019, we said that whilst we don’t feel there is now a need for the phone box at the junction of Mill Lane and Fore Street, we’d  like BT to retain the box in The Square.

It’s the emergency phone for the Town Hall, and also an emergency phone for people in the vicinity of The Square where the mobile phone signal is not always reliable – thinking of schoolchildren getting off the bus and needing to ring home for example.

We only recently became aware that the phone has been out of order,  and asked BT to investigate.  BT have a concern about the bookshelves that have erected being a potential safety hazard, and they can’t access the phone, so they’ve asked for the shelves and books to be removed.  It seems from the newly posted external notice that they are consulting yet again as to whether residents want to retain the box.

We’re aware that the books and DVDs have been a great help to residents especially during the more severe restrictions of the lockdown and we really appreciate people’s enthusiasm in setting up the free books initiative.

We’re waiting to hear back from BT about the consultation issue, and this matter will be on the Agenda for the Council’s next meeting on 7 July 2020.  If you have any comments, please be aware we don’t  have resources to monitor facebook pages and collate comments, but you can easily get in touch with us via the ‘Contact Us’ page on our website, northtawtontowncouncil.gov.uk .

A Welfare Support Fund has been launched by South Hams District and West Devon Borough Councils, in association with Devon County Council, to support residents whose financial situation has been seriously affected by the current pandemic.

The COVID-19 Welfare Support Fund can provide small emergency payments to help with basic essentials including: household essentials such as sanitary products or nappies or electricity key and gas card top ups, etc. to help people in financial difficulties.  The fund is not available for the purchase of food where a food parcel is available. The fund is available if:

You can see more information and apply online on the WDBC website.

Gov.UK has instructions for really easy to make cloth face coverings – there’s a no-sew option using an old t-shirt, you just need to cut out the relevant shape from the t-shirt.  There’s also a really easy sewn version using fabric.  Please be aware that these face masks are not guaranteed to protect the wearer, but they can help to protect others from  your coughs and sneezes, this is why their use in public is being recommended more and more.

A cloth face covering should cover your mouth and nose while allowing you to breathe comfortably. It can be as simple as a scarf or bandana that ties behind the head.

Wash your hands or use hand sanitiser before putting it on and after taking it off and after use. Avoid touching your eyes, nose, or mouth at all times and store used face coverings in a plastic bag until you have an opportunity to wash them.

You should wash a face covering regularly. It can go in with other laundry, using your normal detergent.

When wearing a face covering, take care to tuck away any loose ends.

Face coverings should not be used by children under the age of 2 or those who may find it difficult to manage them correctly. For example, primary age children unassisted, or those with respiratory conditions.

This information is a guide to making a simple face covering. We do not endorse any particular method and other instructions are widely available online. Always take care to use equipment safely to avoid injury. Children should only follow these instructions under the supervision of adults.

Please refer to the attached document for a range of information on coping with hearing loss and tinnitus, and how to help those who are suffering from these conditions.

From today, Boots chemists are offering safe spaces within their pharmacies for victims of domestic abuse.

Anyone needing help can ask staff at the counter to use the consultation room, where they will be able to contact local services for help and advice.

It’s been launched by charity, Hestia, following an increase in calls to domestic violence helplines, since lockdown.

Devon’s regional domestic violence and abuse support charity, Splitz, saw a 62 per cent rise in the number of reports to them during April.

Footer
Scroll to the top of the page

This site uses cookies. By continuing to browse the site, you are agreeing to our use of cookies.

We may request cookies to be set on your device. We use cookies to let us know when you visit our websites, how you interact with us, to enrich your user experience, and to customize your relationship with our website.

Click on the different category headings to find out more. You can also change some of your preferences. Note that blocking some types of cookies may impact your experience on our websites and the services we are able to offer.

These cookies are strictly necessary to provide you with services available through our website and to use some of its features.

Because these cookies are strictly necessary to deliver the website, you cannot refuse them without impacting how our site functions. You can block or delete them by changing your browser settings and force blocking all cookies on this website.

These cookies collect information that is used either in aggregate form to help us understand how our website is being used or how effective our marketing campaigns are, or to help us customize our website and application for you in order to enhance your experience.

If you do not want that we track your visist to our site you can disable tracking in your browser here:

We also use different external services like Google Webfonts, Google Maps and external Video providers. Since these providers may collect personal data like your IP address we allow you to block them here. Please be aware that this might heavily reduce the functionality and appearance of our site. Changes will take effect once you reload the page.